First of all, I would like to deeply apologize for the lack of updates in the last few months. Things... happened. But let's not dwell on those things. This update is a celebration of one of the most successful and overrated franchises in the history of man.


Code:
Let's start with the main reason for this update. Have you heard of the critically acclaimed MMORPG Final Fantasy XIV? With an expanded free trial which you can play through the entirety of A Realm Reborn and the award winning Heavensward expansion up to level 60 for free with no restrictions on playtime. I've waited literally years to add Shadowbringers tracks. Why? Because it wasn't until recently...
Tweet
Continue reading...
Jul 25, 2021

Oh, hey there. My deepest apologies for not updating in months. I've just been busy with work and games such as Nier Replicant Sqrt(1.5) and Fire Emblem: Three Houses. I dusted off my Switch to finally play a Fire Emblem game. 50+ hours in and I'm still somewhere in chapter 8 (help me). I have also gotten super-addicted to a gacha game that I will choose not to name (not Genshin Impact). Needless to say, a portion of the paycheck is funding this addiction (help me). I've also been catching up with FFXIV, since I still have to go through a year's worth of content (rip WoW, btw).

In other news, my job has so many downtimes that I've been keeping myself busy by worldbuilding the Aersia universe. I think I'll be making a game, but I've just been jotting down a novel's worth of random lore and ideas.

Code:
Let's start with my favorite J-pop artist of all time, TM Revolution! You may know him from OP/ED songs for anime such as Rurouni Kenshin and Gundam Seed. But he also composes OP themes for video games. Why is he so awesome? Because of his endless and intense vibratos and the way he incorporates orchestra and rock in his high-energy electronic music. I know these tracks were specifically made for the games, because the games were released before the singles.

This is the first update since everyone was forced to switch to VIPVGM! Hope you all got acclimated and shit.

Time to do some cuddling up with your significant other and listening to some sensuous video game music. Nothing makes them quiver in pleasure more than an amazing track from your favorite video game. I guarantee it! If not, dump them immediately!*

In recognition of Valentine's DayWeek, I'm adding tracks from games with love in them. That's actually a ton of games and includes pretty much every visual novel and RPG.

Code:
I will begin with the VN that inspired some other huge VNs, including Fate/Stay Night and Steins;Gate. Even your favorite investigation lawyer series Ace Attorney owes its gratitude...
Tweet
Continue reading...
Jan 1, 2021 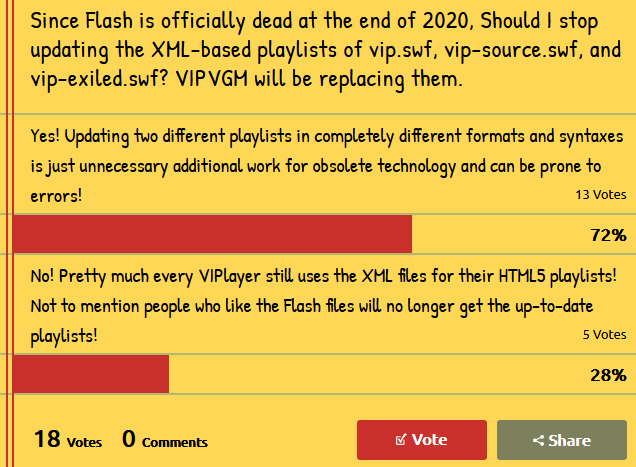 
Thanks to everyone who participated in the poll. It means people actually read the stuff I post.
The people have spoken! The Flash playlists will no longer be updated! Everyone should migrate over to VIPVGM. Moreover, vip.aersia.net will be set up to redirect to the new site sometime in January.

vip.swf had a good run, so let's finish it off with a bang! What better way to cap off the classic playlist and 2020 in general than with some good-old classic Nintendo tunes.


Code:
Let's start at the end with a very sweet and synth-y arrangement! Does it still count as synthwave if it actually came from the 80s?...
Tweet
Continue reading...
Page 2 of 17